The Beginning of GNL – Almost 20 Years Ago 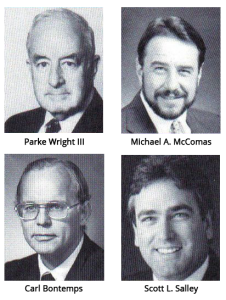 Greater Naples Leadership grew out of the Leadership Collier program established by the Greater Naples Chamber of Commerce to develop and encourage leadership skills within the business community. This program began in 1989 and continues today.  Parke Wright III had served as president of the Florida Chamber of Commerce and had initiated the Leadership Tampa program.  Now a Naples resident, he urged the Chamber to offer Leadership Collier to recently retired professionals who had moved to Naples after successful careers, thereby tapping into their skills and talents.  The Chamber readily agreed to sponsor a Leadership Collier-Masters Program.  Chamber President-Elect Dudley Goodlette asked Mike McComas to chair the first class, and McComas asked Scott Salley to serve as vice chair.  McComas was a restaurant manager, and Salley just recently retired as Chief of Corrections with the Collier County Sheriffs Office.

Based on the format that Parke Wright III had seen in Tampa and with the support of Chamber members and staff, Masters Class I graduated 24 individuals in 1997.  Class II grew to 26 members and Class III increased to 30.

After graduating in 1999, Class III was preparing for Class IV when they received word that the Chamber had decided to cancel the Masters Program.  Perhaps the program proved to be too costly.  Perhaps the Chamber felt that a program for retirees did not fit their mission.  For whatever reason, there would not be a Leadership Collier-Masters Class IV.

The graduates of Class III felt that the experience they had just had was too worthwhile to eliminate and quickly called a meeting to discuss continuing a program independent of the Chamber.  With counsel from McComas and Salley, Dean Van Nest (Class I) and Carl Bontemps (Class II), whose home became the official meeting place, plans were made to create a new organization.  By-Laws were written, a 501(c)(3) nonprofit corporation with a board of directors was formed, and Greater Naples Leadership was incorporated on July 6, 1999, under the auspices of the National Association for Community Leadership.  Thirty-three participants were selected for GNL Class IV and they graduated in April, 2000 as planned.

Since 2006, GNL has joined with the Chamber on projects of common interest that are consistent with our mission; several GNL graduates have served on Chamber and Leadership Collier boards.

The founders of GNL are proud that it has become the successful organization that they envisioned–one that encourages new members’ to use the skills and talents for the betterment of their new community by serving as board members and volunteers for nearly every nonprofit in the county.  [Contributed by Kathleen Slebodnik, Class III]