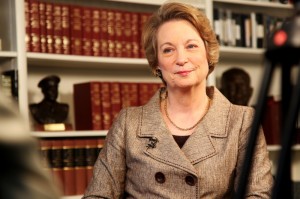 Whether writing or speaking about U.S. foreign policy or testifying, along with Senators Bill Nelson and Marco Rubio, before the U.S. Senate Subcommittee on Science and Space, Susan Eisenhower is a powerhouse of intellect, wisdom, wit and charm.   A consultant to major corporations, author, and expert on international security, space policy, energy, and relations between Russia and the United States, she is also a woman of great humility and graciousness.

The granddaughter of President Dwight D. Eisenhower and the daughter of John Eisenhower, Susan recently wrote of her dad that he had an “extraordinary ability to connect the intellectual dots across centuries of history and articulate them as simple principles, often associating them with the events of the day.”   She wrote this in the foreword of her Dad’s book, “American General: The Life and Times of William Tecumseh Sherman,” which she completed at his request after his death in 2013.

The apple didn’t fall far from the tree. Greater Naples Leadership members will hear Susan’s personal views regarding “Tough Leadership during Transformational Times.”   Similar to her Dad’s ability to connect the dots, she will point out parallels in history to current world affairs and the need for strong leadership to address the critical issues of our times.

Chairman Emeritus of the Eisenhower Institute of Gettysburg College, Susan has done extensive work in executive training on strategic leadership at West Point, the Army War College, the Foreign Policy Association of New York and at numerous corporations throughout the country. She also holds a year-long seminar on strategic leadership for competitively selected students at the Eisenhower Institute.

In her spare time, Susan is also the CEO and Chairman of The Eisenhower Group, Inc. (EGI), a Washington D.C. based consulting company. For more than twenty-five years the company has provided strategic counsel on business development, public affairs and communications for Fortune 500 companies in the United States and abroad, including China, Russia, Central Asia and Western Europe for such companies as American Express, IBM, Coca Cola, AES, Alcoa, and General Electric.

In addition to her work on her Dad’s book, Susan is the author of three books: “Breaking Free,” “Mrs. Ike”, a best-seller about her grandmother Mamie, and “Partners in Space: US-Russian Cooperation After the Cold War.” She has authored hundreds of op-eds for newspapers such as the Washington Post and the LA Times, appeared frequently on national television and radio, and her articles have appeared in such journals as the National Academy of Sciences’ Issues in Science and Technology and the Naval Institutes’ Proceedings. Susan also maintains a blog on her personal website, addressing various issues in foreign and domestic policy, national security, and politics.