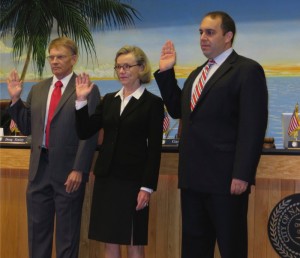 Douglas Finlay, Linda Penniman (Class VII) and Sam Saad, left to right, are sworn in as Naples City Council members on Wednesday, February 19, 2014, at Naples City Hall. Finlay and Saad were reelected to their second council terms, and Penniman to her first. The three candidates were declared winners of a canceled February 4 election after the withdrawal of candidate Wynn Phillips.