PAT CACHO – A MAN WITH A MISSION

Pat was born in British Honduras, a British Crown Colony at the time, population 60-70,000. He is a member of the Garifuna tribe, descendants of survivors of a slave ship sinking near the Island of St. Vincent in the late 1700’s.  You can look it up.  His parents, Lorenzo and Ignacia Cacho, moved to Belize City when Pat was 6 so he could get an education.  At that time, one had to qualify and be able to pay tuition to continue schooling past 6th grade.  There were a few government scholarships given out, and fortunately Pat earned one as his parents could not afford the tuition.  Even in the city, less than one in ten youngsters graduated from high school.  Pat not only graduated (with the assistance of some excellent and helpful teachers), but he qualified for entry into a British university.  However, that had to wait, as even with his high school education, Cacho could only get a job as a messenger. “I was the ‘boy’ who cleaned the desks but wanted more.”  He learned to type and moved up the ladder to typist and then junior clerk.  At the insistence of his father, he took correspondence courses from the London School of Accountancy.  Pat explains it was different then, in that you would send out your work and you might not get back the next lesson for two months.

Sydney Stone, a Chartered Accountant saw Pat’s work and arranged for a scholarship to go to England for education.  He had married the former Laura Noguera, and their first child was born the day before he left.  But the young couple were in agreement that an education in England was paramount.

He attended night school at the prestigious University of Birmingham while working during the day at the Treasury Department. On weekends, his relaxation was to watch a soccer match.  He actually passed the exams for the Chartered Auditor program in 1952, well before achieving his degree.

His initial leave was for 1 year, but he had applied to the City Treasurer in Birmingham, who supported him for the two additional years needed to qualify with the Associate Chartered Institute of Certified Accountants. Pat tells us “I just killed myself with studies” all the while working full time in the Treasurer’s office.  Around this time his child died back in Belize, and he became quite despondent.  Fortunately, his parents were able to pool together the money for Laura to move to England so the grieving couple could be together.

During his years of study Pat had fallen in love with Economics. He qualified for a 3-year scholarship at the London School of Economics and Political Science, where he studied under   Professor James Meade, who later won the Nobel Prize in Economic Sciences.

Pat graduated with Honors, but then he hit a stumbling block.  He applied for a graduate degree, intending to achieve a doctorate, but his sponsor was a conservative and Pat was a Black and a socialist.  After some difficult sessions, he was waiting for his meeting with his sponsor. “I was planning on punching the **** out of the guy,” when a sympathetic professor saw him, realized something was up and asked him to his office for a cup of tea.  “When I told him my plan, he got up, took out his key, locked his door and told me I wasn’t going anywhere until we clear this up.”  After talking over options, Pat agreed to continue his education to earn a Masters degree.  When he took the test, he passed with flying colors, which you may have noted seems to be the norm for Mr. Cacho.

So the Cachos headed home for Belize, where as the only economist in the country he began to work for the government.  His original assignment was to arrange settlement of Canadian Mennonites into Belize from Mexico.  He reported to the Prime Minister, George Cable Price, a “local man,” who historically is credited with helping Belize achieve independence.  He is known as the father of his country.  Pat eventually became Permanent Secretary to the PM, but it was a mixed blessing.  “I thought he was a God-send.  He didn’t womanize.  He did not have any woman in his life to create problems.  He went to Mass every morning.  He didn’t want riches: as long as he had a decent guayabera, George was all right.”  (For those of us with no knowledge of fashion, a quayabera, also known as Camisa de Yucatán, is a men’s summer shirt, worn outside the trousers, distinguished by two vertical rows of closely sewn pleats running the length of the front and back of the shirt.  I had to look it up.)  Pat feels Price was a good man, not out for himself, but for his country.  However, as a politician, he wanted to give key posts to supporters, while Pat wanted to appoint someone with competence, so they often disagreed. And “he understood politics, but he was a dunce when it came to Economics.”

But Pat’s assignment was planning and economic development, so “I worked my *** off creating a plan.”  He studied a number of issues, including land and agriculture, recognizing that preparation is important in any line of work.  He succeeded in creating abstracts of statistics, a development plan and development oriented literature that was quite useful in arranging for funding from the larger neighbors like the US, Canada and of course the United Kingdom. He did so well that Price set the Cacho’s up in an excellent home in a white section of town where he could entertain dignitaries for the Prime Minister.

So they returned to Belize and Pat continued to work for the government, but much of his advice was not heeded.  Jobs went to incompetents and bribery became a problem.  In his position he had to approve all projects, and ministers built the bribes into proposals through tax credits and such.  Mr. Cacho became quite unpopular with the ministers, so in 1966 he called it quits.  He realized that by staying in Belize he was sacrificing a future for his children that he could build for them.  “If I could do that and help my country, fine! But I was not helping my country,” he said.

“When I got fed-up, I decided I would try to get into academia through the backdoor, so I ended up at the University of the West Indies,” he explained.  He was hired as the bursar, but he really wanted to be an academic.  As it turned out, YWI opened a school of international affairs  after he arrived, and he helped organize it and taught courses. He still had dreams of a doctorate, but it was impossible to perform his duties and still study for the degree.

At this point the Cacho’s had four children, and they decided to see if the World Bank opportunity was still available.  Within four weeks he was on the job.  “When I joined, I said, “You know, I am a black man, and I would like to help black places,” and that is pretty much where he was assigned.  He did stints in Bangladesh, Peru and Nepal, but most of his time was 10 countries in Africa, including three years as Chief of Mission in Somalia.  You know in the old newsreels when you see a limousine with a driver, a flag and a VIP in the back seat? Yep, that was Pat Cacho.

He left Somalia when he saw the war clouds on the horizon. Tribalism was rampant, and he foresaw the civil war. Pat’s final assignment was two years as the World Bank’s agricultural advisor to Zambia,

The Cachos left Africa to return to DC, but after several years he became disillusioned with the World Bank’s performance.  When he reached age 62, Pat decided to retire.  At this point Laura and Pat’s four children had graduated from college, all with advanced degrees.  Pat tells me proudly that his youngest daughter has the doctorate he always wanted, and he is content with that.

So Laura and Pat visited Florida, looked around, and like many of us saw that Naples is the place to be.  They bought a place and played a lot of tennis, while Pat immersed himself in the eleemosynary community.  Some of Collier County’s education statistics surprised Cacho and his wife.  “When we looked at the figures, we saw that the performance of minority students was really poor,” Cacho said. “Of course, the majority of students were doing very well.  That decided for us what we should do with the rest of our lives.  We decided that we simply had to get in there and try to see what we could do with the minority kids.” He zeroed in on education and training of young Blacks in the area.  Pat and Laura dedicated himself to Fun Time Academy’s mission to provide safe, quality, affordable education and care for children of low-income families so they are ready to read and ready to learn for kindergarten. He also volunteered as a classroom assistant in the Collier school system, mentoring many students, and he funded (and continues to fund) a number of scholarships to FGCU for Black youngsters who otherwise might not be able to afford college.  As of April of last year, some 44 students have benefited from the scholarships.

Pat wasn’t about to tell me, but in looking through some of his memorabilia, I came across pictures of a library and a science lab in Belize with familiar names on the facades.  Turns out Pat funded these buildings and had them named after his mother and father.  In answer to inquiry he noted that he is currently expanding the library.  I suspect he is responsible for many other good deeds he neglected to mention. Looking around his and Leonie’s home in North Naples, I could see numerous plaques and certificates on display.  Presenters included the NAACP (Citizen of the Year), FGCU, Rotary International (Paul Harris Fellow), the Early Learning Coalition,  the Community Foundation (Cosgrove Award), Exploring New Directions for Florida’s Children, and the President’s Council on Service and Civil Participation.  There were others.

As one who has watched our country struggle with implementing equal rights for all Americans, I was taken by a quote from a treatise written by Pat some 30 odd years ago.  He reasoned that “According to the scriptures, man (and I take it that this was meant to include ‘woman’) shall not live by bread alone.”  So equal rights to Mr. Cacho brings everyone under the umbrella. And by the way, you might want to visit https://amandala.com.bz/news/cornelius-pat-cacho-writes-land-policy/ to see the kind of work Pat can produce.

It has been an honor to spend some time with Pat Cacho.  I feel like I have barely scratched the surface of the story of his life.  I should mention on the personal level that Laura, his wife of 50+ years, passed away in 2007, and he has remarried.  The FGCU scholarships are given in the name of Pat and Leonie Cacho. 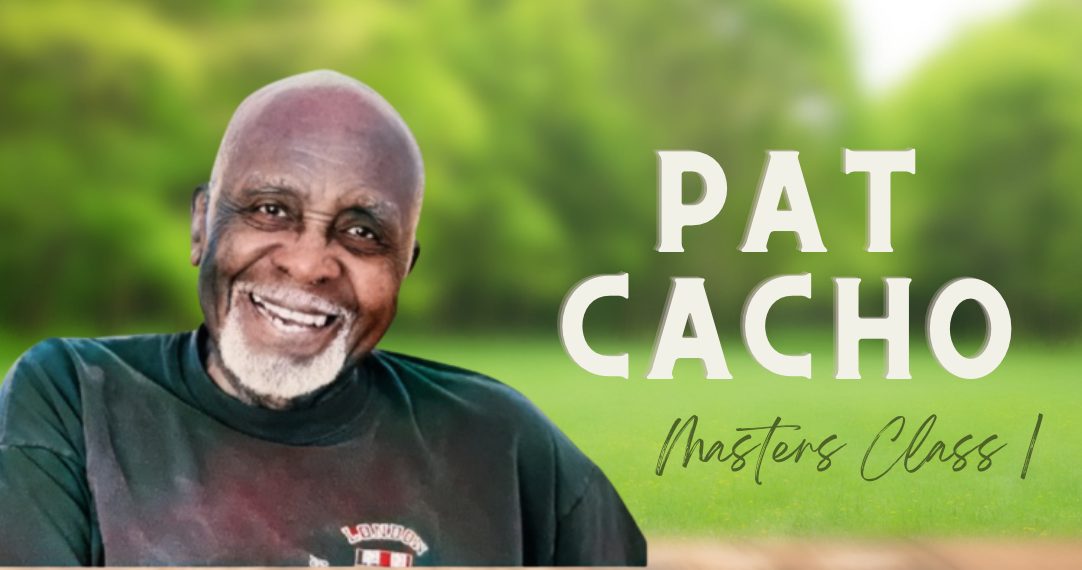 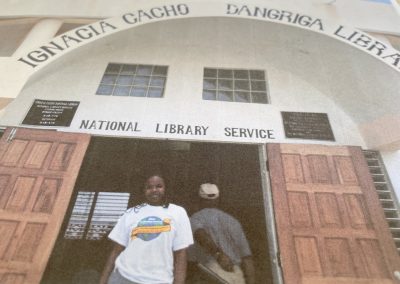 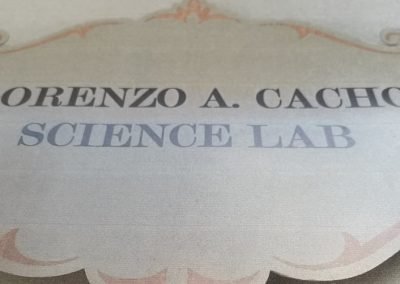 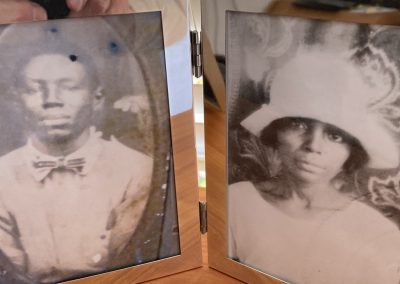 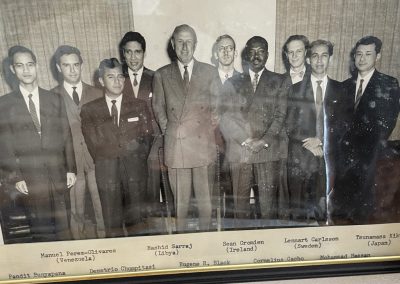 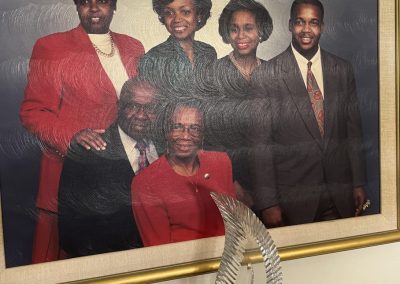 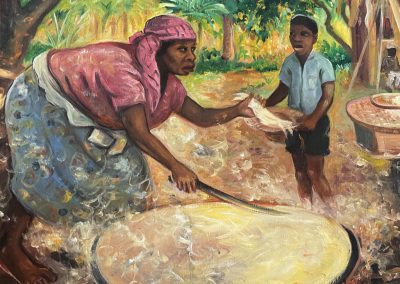 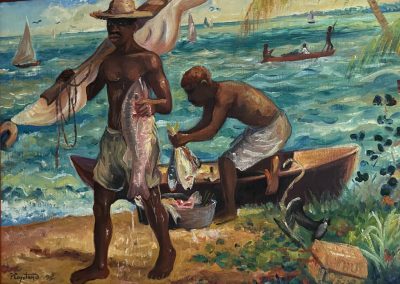