Men’s Reunion at Habitat for Humanity 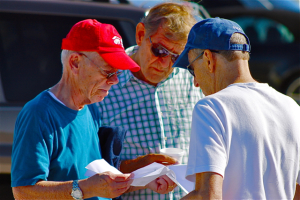 Habitat has already transformed the lives of more than four million people around the world.  Through generous local support, including many GNL’ers, Collier County has one of the largest Habitat programs in the U.S.

The day included a morning of light work on homes being built in Regal Acres. The attendees met a 94-year-old volunteer still working to build homes who was an inspiration to all.  After working together for several hours and enjoying a box lunch, a bus took the men to view a trailer park where many poor live.

By contrast, they then toured Charles Estates, a completed and well-maintained Habitat community, evidence of the good work this organization does. [contributed by Karen Anderson]