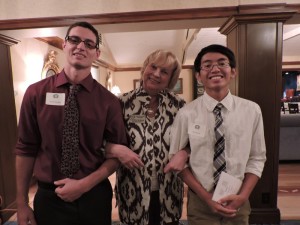 “Perfect role model,” “devoted to his community and friends,” “example of fortitude and courage,” “infinite good humor” and “appropriate recognition of a good citizen” were just some of the phrases heard as colleagues described this year’s Distinguished Leadership Award recipient, Bob Morantz, at the celebration dinner on April 2.   Speaking directly to Bob through the video camera, Mitch Sahagian, a college sophomore whom Bob mentored since 8th grade, said, “You have enhanced my thinking and taught me to never give up.  You raise the bar of success.  My only request is that we go to breakfast and lunch more often.”  Tien Nguyen, a sophomore at Naples High, told Bob how much he had missed his weekly lunches since Bob was away for treatment.  “Bob taught me to always respect my parents,” said Tien, “and to set high goals in life . . . always strive for the best and always overcome fear and obstacles.”  Desiring to be an orthopedic surgeon, Tien concluded, “I hope I will become what Bob envisions for me.”

Following congratulatory tributes by Susan McManus, Dottie Gerrity and Doug Johnson, and a round of “For He’s a Jolly Good Fellow” led by Bob’s classmates, Marsha Murphy, Bob’s wife, accepted the award on his behalf.  After two month’s away in Little Rock for his fourth bone marrow transplant, Marsha expressed their regret that he could not be be present.  “From the bottom of his heart,” she told everyone,”he thanks you and loves you.  And you know it’s true”  In his closing remarks, Don Shapiro, chair of the award committee and self-proclaimed Dodgers fan, quoted one of the nominators who said, “Bob Morantz is certainly a heavy hitter.” [Jeanne Bolds, Class VIII]