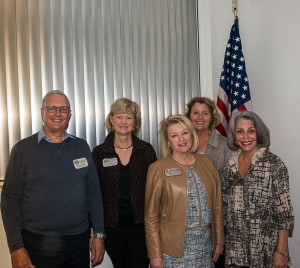 Government Day for Class XX focused on our collective and individual service and commitment to GNL and the Greater Naples area through government service. This call to service was reinforced throughout the day by the number of GNL alums featured as speakers. The Day’s emphasis was on the interplay between government and service, with the following aims:

The morning explored the mechanics of it, including a primer on government and voting and the importance of following the money, with speakers Sandy Parker, Jennifer Edwards and Mark Isackson.

Next, a visit from elected government officials – Donna Fiala; Linda Penniman, and Larry Honig, who translated this into action followed by a robust class dialogue with the speakers. Many of the Class “take aways” from previous sessions which related to government were explored in this and subsequent sessions. In an immediate “constituent service” following her presentation, Linda Penniman, Naples City Council, sent notice to the City Manager regarding a need for action concerning an issue raised during the discussion. Several issues echoed throughout the day: affordable housing; storm drainage, and development.

During Lunch at Seasons 52, the Class heard from The Honorable Ramiro Manalich, Judge, Lee County 20th Judicial Circuit, whose own inspiring story and legal experiences on the bench galvanized them.

In the afternoon, at NAPLES DAILY NEWS the Class participated with two panels on key issues that are bubbling and percolating within this community, examining these from different perspectives and considering different needs within different communities, all within the contours of Collier County. The first panel, moderated by Manny Garcia, Executive Editor of NDN, along with panelists Kellie Burns, Anchor, NBC2News, Fort Myers, and Brent Batten, a columnist for NDN, focused on how the Government responds to the important issues facing us today. In a follow up to a column in that day’s NDN by speaker Brent Batten, NBC2 News interviewed Marco Island City Council member Larry Honig regarding a specific Marco Island issue. The second panel examined how law enforcement works from the perspective of the Police Chief of Naples and the Sheriff of Collier County.

And, at the end of the day, the Class bore witness to GNL alums who live the commitment that ran through this day, with the hope that it would thread their needles as they proceeded onward towards Immokalee.