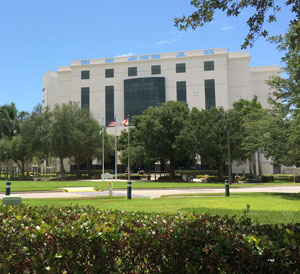 Government Day for Class XIX was held on November 19, 2014 in the South Regional Library on Lely Cultural Parkway in East Naples.  The day began with the singing of the Star Spangled Banner by a guest vocalist from Lely High School.  Sandy Parker (Class X), League of Women Voters Government Chair, followed and took the class through a review of the powerpoint, “Our Florida Government: An Introduction.”

Mark Isackson, Director of Corporate Finance and Management Services for Collier County, helped the class to “Follow the Money” as he reviewed sources of revenue and allocation of county funds.

After a short walk to the Collier County Emergency Services Center, Dan Summers, Director, conducted a tour and spoke about the County’s plans and capability to deal with actual emergencies that threaten our safety.  Bill Rule, Commander, CCSO Communications Center, gave an overview of the Communications Group Center functions and responsibilities and conducted a tour of the 911 Working Center.  As the Class exited the ESC, they had the opportunity to tour the County’s Mobile Command and Mass Casualty Units. [by Pat Rutledge, Class XVIII]