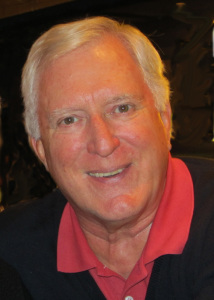 1. Where did you grow up, and where have you spent most of your life? I grew up in a small-town suburb of Philadelphia, PA called Yeadon; then I went to Gettysburg College nearby and on to Penn State for a Masters in Economics & Statistics. When I joined Ford Motor Company I lived all over the country and in Europe.  Finally, I lived 15 years in Washington, D.C. just before coming to Naples in 2000.

2. What was the most important factor or experience influencing your character or leadership development in your young life? Without a doubt working with my dad and two brothers in my dad’s wholesale live and dressed poultry business was a major factor. Selling poultry to many small markets in the Philadelphia area was a difficult business, and we all worked very hard from early in the morning.

3. What best characterizes your life’s work? I was mostly in “product planning” where my job was merging new technologies with market opportunities.  I worked for Ford Motor for 15 years in the U.S. and in Europe, and then ultimately for 10 years with Ford Aerospace & Communications where I was vice president of marketing & business planning. The last five years I became president of Ford Aerospace Satellite Services. I left Ford in 1986 and for two years became an independent aerospace consultant advising companies on launch vehicle and satellite services. That led to my joining Orbital Sciences Corporation as vice president for satellite services and then becoming president of ORBCOMM (Orbital Communications Corporation), an in-house satellite services company. Orbital made the rockets and ORBCOMM marketed communications services.

4. What is the most challenging thing you have ever done?  Definitely it was developing ORBCOMM from scratch and raising millions to get it built and launched to space. We launched eight small (93 lb) satellites at a time, using modified L1011 jet airplanes as the launch pad, and these have served thousands of customers.  For example, Wal-Mart has 25 thousand trailers connected to ORBCOMM satellites.  ORBCOMM was also my most significant business accomplishment. It is now an independent firm on the stock exchange.  I retired in 1999.

5. How long have you lived in Naples? And what is the main reason you moved here?  In 1999 my wife and I began looking for a good place to retire. We looked in North Carolina, on the East Coast of Florida, even Key West. Most of all, we wanted to live in the center of a small town similar to the towns where we grew up.  My brother who lived in Naples suggested we look here, and we found being in old Naples perfect.

6. What do you believe is the greatest need in Collier County? Collier County must recruit some light industry that can provide decent jobs. The tourism should come back, but we need more economic diversity to bring new jobs that will then stimulate construction once again as well.

7. What is an issue in our community that you care deeply about?  Well, I care deeply about old Naples sustaining its charm and vitality, and a related issue is not having the airport extend its runways for larger planes.

8. What community projects are you currently involved with and what impact have they had on your life? I am president of the Old Naples Association. I was also chair of the technical advisory committee to FAA Part 150 Noise Study, which was disbanded by the Airport Authority when they did not like our recommendations. I have a website and e-mail list to keep people abreast of the issues: www.betternaplesairport.org.  I also have worked with the Immokolee Housing & Family Services group comprised mainly of GNL grads. We are working toward providing decent and affordable housing for farm worker families.

9. What has been the greatest outcome for you from being part of GNL? GNL made me a part of the community. It fulfills a wonderful integrating function. I would not have been involved with the Immokolee project without GNL. The organization is great for meeting interesting and accomplished people and making good friends.

10. Have you any words of wisdom to share?  In whatever arena one is interacting–work, community, family, political issues, one should ask, “Is it fair?”  We need to be about treating others as we wish to be treated.