A History of Class III 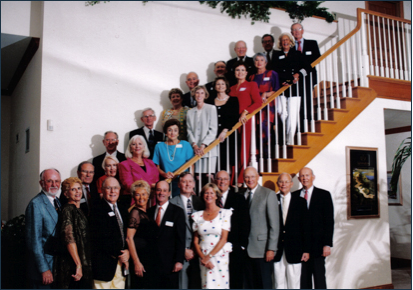 But, let’s start at the beginning. An application designed to capture our past accomplishments, both in career achievements and involvement in community activities, appeared in our mailboxes in April 1998, indicating that we had been nominated for participation in the upcoming class. Cost for attending the class was $895. Through the application process, we had agreed to adhere to Leadership Collier’s mission statement:

The mission of Leadership Collier is to build a broad-based network of community leaders who enhance their leadership abilities and skills through continuing education, shared perspectives and community involvement in order to enable them to work toward solutions in the public interest.

On June 5, the acceptance letter arrived, informing us that our class leaders would be Chairman Dean Van Nest and the Vice-Chairman Carl Bontemps. Our Program Manager was Leslie Sawyer, an employee of the Chamber of Commerce. Excitement mounted.

The 33e classmates chosen for Class III met each other at a kick-off reception at the Naples Beach Hotel on October 28, 1998. In addition to class members, the reception was attended by alumni of Classes I and II, the press, and members of the Chamber of Commerce to cheer us along. The following day, classmates met again at the opening retreat at the Radisson Suite Beach Resort on Marco Island, where we resided for two days. We had been preparing our introductions for several weeks, having been instructed to write a three-minute essay about ourselves in a style of one of the following authors: Shakespeare, Steven King, James Joyce, Sidney Sheldon, Charles Dickens, Gertrude Stein, Dr. Seuss, Charlotte Bronte, Ogden Nash, or Raymond Chandler.

It didn’t take long into the alphabet of clever and creative introductions of our classmates before we knew that we were in for a stellar experience. The introductions were brilliant and revealed careers, accomplishments and experiences from the world over. With each impressive introduction, no doubt anxiety further down the alphabet was mounting. Nonetheless, our last classmate, Joanne Wyss, delivered perhaps the cleverest introduction of all — written in the stream-of-consciousness style of James Joyce with one long-running sentence with no punctuation or pause for three pages. At the end of the day, we all felt ready to participate in a leadership journey through Collier County.

That afternoon, we began the first session, County History and Government. We broke into groups to role-play a scenario where a family wanted to develop property with partial wetlands and was appealing for rezoning from the County Commission. Various groups represented the County Commission, the family, the develope and an environmental organization. The members of the County Commission were stern, a family member showed up in a wheelchair to illicit sympathy with a blanket around his shoulders (actually it was a hotel towel), the developer gave a polished plan for saving the wetlands, and the environmental organization that was concerned about destroying the habitat of the no-see-ums if wetlands were compromised including a photo of a no-see-um. Of course, it was a blank piece of paper, because you can’t see a no-see-um. The fun and creativity of the exercise created a bond that continued to strengthen throughout the course. The following day we toured Marco Island, Smallwood Store and Everglades City, learning the history of Collier County along the way.

The following sessions were scheduled from October to April: Economics and Growth Management, Environmental Issues, Communications and the Arts, Health Care, Social Services, Education, Agriculture/Immokalee, and Law Enforcement. Our holiday reception was held at the Telford Center for Education at Naples Community Hospital on December 10, 1998. It was our first opportunity to meet spouses of our classmates.

The sessions served as building blocks that would eventually provide us with a detailed overview of the issues confronting Collier County. As the program unfolded, interest mounted, and we could barely wait until the next class session. Almost every Q&A session ended with Tucky Ramsey asking, “If I gave you a blank check, how would you use it?” On Environment Day, our visit to Corkscrew Swamp Sanctuary was the first for many of our classmates. On Communications and Arts Day, we visited the Naples Daily News, the new Sugden Theatre, and the von Liebig Arts Center. On Education Day, we visited the new Gulf Coast High School and ate lunch with students at The Community School. On Agriculture/Immokalee Day, we experienced a bit of excitement as we boarded boats for a tour of Lake Trafford. As one boat drifted away from the dock, Tucky Ramsey decided to reposition it. She took the helm and forged forward a bit too quickly, ramming the dock and tossing the passengers about. Oops! Ever since, we have affectionately referred to her as “Admiral of the Fleet.” And perhaps the best part about the individual ride-alongs with a Collier County Deputy Sheriff, in preparation for Law Enforcement Day, was the telling of it. We enjoyed swapping stories of our independent experiences. Law Enforcement Day proved to be the favorite session. We visited Judge Ted Brousseau’s courtroom to witness juvenile court proceedings and ate lunch in the jail, enjoying a more elaborate menu than the one served to the inmates.

On April 7, we critiqued our total experience and chose which sessions each of us would help plan for the following class. Also, a committee headed by Ned Sachs was formed to develop a class project. We established the Leadership Collier Masters Class III Fund at the Community Foundation with a goal of $25,000 and designated that each year the earnings of the fund would be awarded to a non-profit organization serving the community. The first year $750 was awarded to PACE Center for Girls, Inc. in Immokalee to pay the annual online costs of their computer center.

Graduation on April 16, 1999 was sweet sorrow. We were ready to move on into our summer schedules, but knew that we would miss our 32 new friends with whom we had shared a unique bonding experience that would last for years to come. Before any of us left Naples for the summer, we began fulfilling our responsibility of planning the sessions for Class IV and soon learned that we not only made friends with our classmates but also would also become friends with our many speakers and community leaders who graciously agreed to participate in the Class IV sessions and help us individually integrate into our community.

As we went our separate ways, we felt that we had met the Chamber of Commerce’s primary objective to educate a select number of community-minded citizens who would meet and address the current and future societal and economic challenges of Collier County. We would come together many times in the future as well-informed community leaders to build a diverse network for the betterment of our community.

The history of Class III does not end there. Upon learning the Chamber of Commerce was planning to drop the Masters Class from its leadership program, members of Class III, rather than simply witnessing the demise of this important program, rose to the challenge and created Greater Naples Leadership. Perhaps this is why Class III has always felt exceptional loyalty and connection to GNL. Class III has demonstrated their commitment to the continuing success of GNL in many ways: Tucky Ramsey formed the Alumni Association; Lacey King volunteered to be the Administrative Director of Classes V and VI; and Ned Sachs, Tom Schneider, Carl Kuehner and Joanne Wyss have all served as President of GNL. [Contributed by Lacey King, Class III] 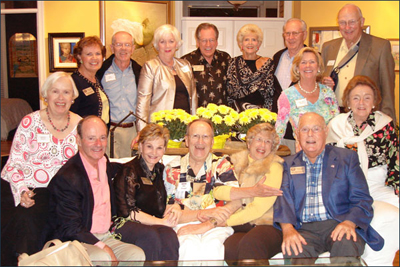